This weekend, I spent some time at the Southeastern LGBTQ Activist Camp in Jackson, Mississippi. This yearly gathering is a true example of the sort of coalition- and community-building effort that will be crucial to securing long-lasting progressive victories across the South. Working in concert with the GSA Network, GLBTQ youth organizations from across the South bring young people together for four days of trainings and workshops centered around building power in their communities, agitating against intersectional oppression, and fighting for policies that are inclusive of GLBTQ youth in their schools and their communities. The camp is a mix of rigorous training and lighthearted fun, which are both sorely missing from the lives of GLBTQ youth in the South. Everyone appeared to be getting a lot of mileage out of the camp, and enjoying one of the few safe spaces for GLBTQ youth that exists in the South.

Then the verdict in the Trayvon Martin case came down: George Zimmerman was not guilty.

If I am honest, I did not feel sad or angry. I knew that this was going to happen. The moment this case became about “creepy-ass crackers” and Zimmerman’s “injuries in self-defense”, I knew that he would never see the inside of a jail cell for the crime. The moment I realized just how little Zimmerman’s lack of obedience to the instructions of the dispatcher was getting mentioned, I knew that this would be the outcome. Chalk it up to being Black for 28 years and always expecting the worst. Chalk it up to the burgeoning sense that my body, my life, and my dignity as a Black man is absolutely meaningless to the institutions that govern our society. Chalk it up to the fact that I have seen this before. Chalk it up to whatever, but I knew how Saturday night was going to end: in infamy. Racism, bigotry, and oppression has hardened my heart, so not a lot of emotion would be forthcoming.

But for a lot of the kids at this camp, they were not expecting the worst. They likely expected that the criminal justice system would, well, mete out some semblance of justice. It did not, and the pain showed on their faces as they talked about what this meant for them, their friends, their classmates, and their communities. They cried and they comforted each other as the gravity of the Seminole County jury’s decision began to sink in. And the lessons from that weekend became very real, very fast for 40 young people in a hotel conference room in the heart of the South.

It would have been understandable for them to just go into their bedrooms and grieve. Or be angry. Or scream and yell at George Zimmerman’s smiling face on television, as he becomes yet another symbol of oppression in a country that has had a long, inglorious history of praxis in that area.

But they did no such thing. They immediately wanted to do something. They first wondered if a community event was taking place in Jackson that night. The chaperones and facilitators of the camp either hopped online for information or got at their local contacts to see what was going on. I tweeted at the mayor, but I got no tweet back, and our contacts yielded no information about vigils that were taking place.

So these youth decided that they wanted to have their own vigil.

We went out and got supplies, made candle holders out of Dixie cups, and left for the Mississippi State Capitol, which was where the camp attendees had agreed to have their vigil. As we approached the Capitol grounds, we had gotten word that the Capitol Police were already there and telling us that we could not gather at the Capitol grounds. You know, permits and all that. I guess that Mississippi’s white Governor could not take the risk of having his building undefended from the residents of the capital city (which is 80 percent Black).

The young people were a little disappointed, but quickly decided to just have the vigil in the parking lot across the street from the hotel where everyone was lodging at. After checking with the hotel management and security people (who were very supportive in all of this), we went ahead with the vigil. 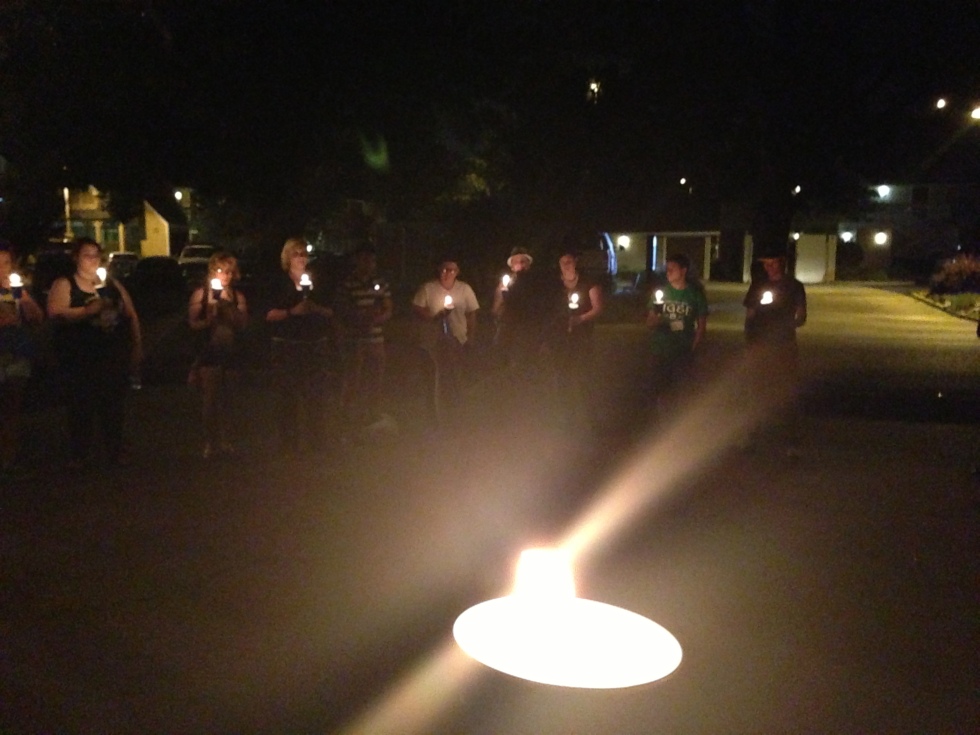 As the vigil went on and campers talked discussed their feelings about Trayvon Martin’s tragic end, something amazing happened: people who were unconnected to the camp began to walk over and join our vigil. They were dressed in clothes that gave the appearance that they were heading out for a night on town; perhaps they were celebrating an event in one of their lives, or engaging in a weekly ritual, or maybe they were needing to get away from the soul-crushing sadness that a Florida jury delivered America on that fateful Saturday night. Regardless of the reason, they walked over one-by-one and held candles of their own in a somber remembrance of a life taken far too soon. After the vigil ended, the folks from the community hugged the kids from camp. It was a show of solidarity, as if to let these young people know that they were appreciative for giving them the sense that there were people out there who gave a damn.

It was at this moment that I began to feel my heart soften in a way that is rare for me.

At the vigil, I told them that they, and I, stood on the shoulders of people like my grandmother. My grandmother, Dorothy Marie Boone-Anderson, was a civil rights leader in the community that I grew up in. Through her work with the NAACP and the Wilroy Civic League, she was able to integrate Driver Elementary School, which became the first integrated school in Nansemond County, Virginia (now the independent city of Suffolk):

Thinking about her in that space provided a perspective of continuity in the fight for social justice; our fight has endured as long as oppression has endured. And having lived in the South for 19 of my 28 years, I have seen a lot of oppression. It can be easy to succumb to hate, not just for the human suffering itself, but also for the people who knowingly and unknowingly propagate it. My heart has often felt heavy when doing community work, and I think that few would have blamed me for lashing out at the world on Saturday night.

But these campers made me feel heartened about what is to come. This is the future. These kids are the future. They are the activists that will  march side-by-side with other activists and oppressed communities, and they will be agitating for intersectional change in the long-term. This camp is the future. Anything that gives our youth the tools that they need to be change agents in their neighborhoods will need to be replicated many, many times if we want to create a world where Black children do not have to fear being killed simply because they are in “the wrong neighborhood”.

Watching the participants at the Southeastern GLBTQ Activist Camp this week, however, I experienced a feeling that does not come easily to me. One that will power my drive for change for as long as I am able to recall the events of July 13, 2013:

Promote Your Page Too