This weekend, I spent some time at the Southeastern LGBTQ Activist Camp in Jackson, Mississippi. This yearly gathering is a true example of the sort of coalition- and community-building effort that will be crucial to securing long-lasting progressive victories across the South. Working in concert with the GSA Network, GLBTQ youth organizations from across the South bring young people together for four days of trainings and workshops centered around building power in their communities, agitating against intersectional oppression, and fighting for policies that are inclusive of GLBTQ youth in their schools and their communities. The camp is a mix of rigorous training and lighthearted fun, which are both sorely missing from the lives of GLBTQ youth in the South. Everyone appeared to be getting a lot of mileage out of the camp, and enjoying one of the few safe spaces for GLBTQ youth that exists in the South.

Then the verdict in the Trayvon Martin case came down: George Zimmerman was not guilty.

This article was written with the assistance of Sarah.

If the media acted in a way similar to Twitter, one would say that Southern politics has been trending as of late.

It was the subject of a series by The American Prospect, and an article by Molly Ball of The Atlantic. It has been a frequent topic on MSNBC. National Public Radio has a series called Texas 2020 that is currently running on Morning Edition and All Things Considered. State Sen. Wendy Davis (D-Fort Worth), who filibustered an anti-abortion bill in the Texas Senate and provided a spark to Southern progressivism that had not been seen in a long time, has made the media rounds, getting the most exposure of any Texas Democrat since Gov. Ann Richards (D-TX). All in all, the visibility of Southern politics on the national stage is as high as its been since an unknown Governor from Arkansas came from nowhere to emerge as the preeminent Democratic politician in the 20th century (even if his progressivism was, and is, far from preeminent).

But with all of the talk about the emergence of a new South, there has been something missing: a discussion about building progressive power in the South.

“The senators are your voice here on all matters. They are the only ones we’ll be hearing from today.” – Lieutenant Governor Forest to women and women’s allies in the North Carolina Senate Gallery.

When the person who oversees the North Carolina Senate tells the public that its voices do not matter, how can we believe in the foundational tenant of “democracy”? On “Independence” day, we are told to celebrate these foundational elements of what our country hypothetically values. The concept has been debatable for as long as it has existed since on Independence Day many people were not independent. Yesterday, though, as I stood among 600 pro-woman supporters at the North Carolina General Assembly, I was reminded of the power of people; today I will celebrate that act of patriotism and celebrate North Carolina’s feminist army. I was reminded that our fight happens every day that we are a part of the social fabric of this state and this nation, a fabric of an American flag that is sewn together with threads of patriarchy that have yet to be fully loosened. 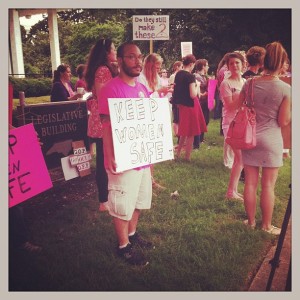 You can also find this piece at The Century Foundation’s Blog of the Century.

Some have recently suggested that changing demographics in the South (defined here as the states of the Confederacy) herald an end to Republican dominance in Southern elections. Citing Barack Obama’s 2008 wins in Florida, Virginia, and North Carolina they have argued:

For Southerners, the message was unmistakable: The future has arrived. The Solid South is dead.

Not long after reading that, the U.S. Supreme Court put a southern-sized dent in the Voting Rights Act, which was written and passed to keep mostly southern states and their entrenched political structures under the eye of the federal government.

The idea of a “dead” solid south got me thinking. And the voting rights decision made me convinced.

The South is being driven towards political competitiveness by large-scale demographic changes. But it’s not here yet – and in fact (to borrow an analogy) rumors of the demise of the Old South are greatly exaggerated.